0
was successfully added to your cart.
Category

By AllianceFrancaise | Uncategorized | No Comments

To celebrate #InternationalDanceDay, our Librarian Renée compiled a list of books related to dance, for children aged 3 to 14 years old. All the books are available on Culturethèque, an online library for Alliance Française members.

International Dance Day is a global celebration of dance, created by the International Theatre Institute, UNESCO’s partner of performing arts. It is celebrated annually on April 29th to promote art and culture and raise awareness about dancing. Why is it celebrated on this day? Because April 29th marks the anniversary of the birth of Jean-Georges Noverre, a French dancer and balletmaster, considered the creator of modern ballet.

Dansez vieux géants par Gerard Moncomble et Sarah Mercier.  A story of overcoming fears. The kindly, fearful giants learn to dance as they embrace the unknown with the help of community. Audiobook, Storyplyr, 5 years and up.

Ou êtes-vous Monsieur Degas par Eva Montanari. Ballet-dancer Eva goes looking for her backpack when a famous artist inadvertently picks it up. Surprisingly, she encounters Caillebotte, Monnet, Renoir, and Mary Cassatt along the way. Audiobook, Storyplyr, 5 years and up.

Danse avec moi par Isabelle Bottier. A young teen finds her special niche within her accomplished family and among her friends through the mastery of hip-hop dance. Digital Bande Dessinée. Geared to a young audience,  Ages 11 – 14.

To give you an idea of what Culturethèque looks like: 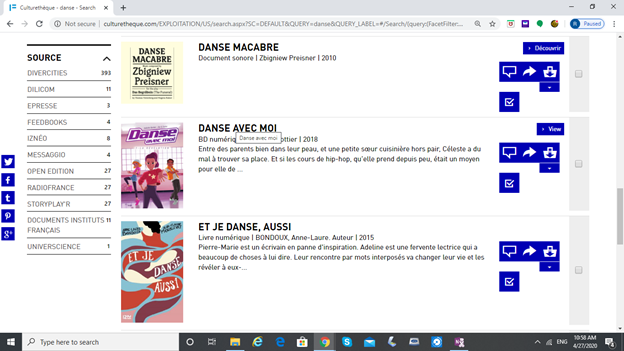 Hey francophiles. Crazy week, huh? (It doesn’t actually matter when you read this; I’m sure that week has been crazy too)

In an effort to distract myself from the mounting horrors of the outside world and the mounting responsibilities of the inside world, I’ve started regarding my pile of books with a special kind of attention usually reserved for savants or madmen. From these hours of nervous-avoidant reading, I’ve come to realize that one of my favorite things about the French language is its propensity for having wildly better names for animals than English does. Sure, we can concede that simply everything sounds better en français, but there’s no arguing that the French know how to name their critters. I don’t really have any criteria for my ranking system, other than the explosive need to share these really great-sounding words with you. I will provide a rationale for each entry, so bear with me. Also, if it weren’t already apparent, this is not a list of cool French suggestions for pet names. As a piece of consolation, “Gigi” normally works fine.

So without further rambling and scrambling, I present to you my Top Ten French Names For Animals Because Why Not At This Point:

1) Une chauve-souris (Bat): Hey, if you were to describe a bat to someone who had no concept of them, but knew what a mouse was, what key differences would you draw on? If you answered “well, bats are bald,” congratulations! You are French and also a crazy person. Chauve-souris, translated literally, means “bald mouse,” and frankly, that alone does not touch on what I would argue to be the core features of a bat. Namely that is has wings. Nice try French, but if someone were to alert me to the presence of a wig-snatched rodent, I would assume they walked in on me watching the ending of Beau Travail, not a bat in the rafters.

2) Un raton laveur (Raccoon): I’m sure you saw the hyphen here and went “uh oh, this one is gonna be some weird, misleading rebus also.” Never have you been more wrong, dear reader! Raton-laveur literally translates to “little washer rat,” or more adorably, “baby washer rat.” Raton is the diminutive form of rat, and laveur means washing machine or washer, so we could more colloquially call these scary little bandits “mop-rats”, “soap-scoundrels”, or “detergent vermin.” So it’s not a weird misleading title, but an endearing, uncomfortably accurate one! Don’t raccoons look they’ve been through the wash one time too many?

3) Un porc-épic (Porcupine): You could probably guess this one from sounding it out, and it makes a good deal of sense when translated. A porc is a pig and the –épic part likely comes from some denomination of prickly words, either piquer meaning “jab” or “prick” or épée (sword)/épine (thorn, spine). So a porc-épic is basically a prickly pig, not to be confused with the porc épique, which is a pig of epic proportions. It’s also just very cute as far as nomenclature goes. Also related is hérisson (hedgehog), which takes the verb herisser (to prickle) and makes it a diminutive noun – LITTLE PRICKLER!!!!

4) Un blaireau (Badger): Okay, I’ll come clean – this one has no crazy etymology or literalized translation. I just think it’s a dapper name for an dapper animal. Blaireau is the name of your rotund uncle with too-small reading glasses who gives you an almanac for your eleventh birthday. Blaireau is the name of the wealthy baron whose prissy attitude hides a sincere love for poetry. Blaireau is a reverse mullet, blaring with presence at the beginning of the word and streaming together in tidy roundness towards the end. Blaireau is also, coincidentally enough, the French word for a shaving brush, but I’m willing to concede precedence to the animal here.

5) Un mille-pattes (Centipede): If you know even the slightest bit of French, you’ll probably be scratching your head at this one. And all I have to say is, YEAH me too dude! As we all know, centipedes have 100 legs (or feet), with their name deriving from the latin “cent”, meaning a hundred, and “ped” meaning foot. This is how we differentiate them from their infinitely creepier-crawlier cousins, millipedes, which have “like, a thousand feet”, according to whoever etymologized that one. So why are the French so willy nilly with their roots as to designate the humbly hundred-legged centipede the name of “thousand paws?” Well, the simple answer is that there is no casual differentiation between centipedes and millipedes in French, despite the two arthropods belonging to two different taxonomical classes. If you’re academic or lazy, you can just throw out the word “myriapodes” – a Greek loan word meaning “many feet.” Cheater!

6) Un papillon de nuit (Moth): Speaking of confusing two insects for one another, how about showing some love to our good friend, the “night butterfly?” I love this one, as it has both the poetic elegance of metaphor and the stark bluntness of someone trying to describe to you that thing they just saw. French gets a pass on this one because I totally get it, but I think a lot of people don’t think as kindly of moths as they do of butterflies. In our cultural mythologies, butterflies are beautiful agents of pollination, symbols of rebirth and beauty. Moths are ugly little dowagers that eat clothes. Shame on you, popular imagination! We could learn a thing or two from the French and their moth-positive outlook on life.

7) Un Élan (Moose): You’ve surely heard someone speak about their élan vital in reference to something they can’t live without. Élan vital, translating to “necessary moose” is an expression that comes from an old Québecois aphorism that advises hunters to keep their eyes peeled for moose as this “vital” animal would surely provide adequate sustenance for the foreseeable future. Just kidding, that’s totally false, “élan” really means “spirit” or “essence”, though when it’s used without the affixed “vital,” it’s pretty safe to assume the person you’re talking to means moose. Funnily enough, “moose” in Canadian French is original, which is just begging to be tacked onto “with cheese.”

8) Une Méduse (Jellyfish): Every language has a better word for jellyfish than English does and I’m mad about it. Spanish, French, and Italian all treat these bizarre creatures with the mystery and mythology they deserve, referring to them as some derivation of “Medusa,” that famous gorgon of Greek legend with the serpentine hair. And how appropriate is that? Aside from the fun visual comparison of tentacles to snake-locks, there’s also this baked in appreciation for the tension between awe and danger that these creatures inspire. And the widely accepted English translation? Jellyfish. Like, a fish made out of Jelly. Très inspiring. You know, now I feel kind of bad for making fun of the chauve-souris – what better example is there of ugly Americanism than naming such a mystifying creature after the culinary staple of the 1950s? The French are on to something here, or more appropriately, we’re off of something. Let’s just start calling them Medusas from now on and forget this whole thing ever happened.

9) Un Buffle (Buffalo): Let’s face it – the English term for buffalo is already really, really, good. Its versatility as a word means you can make an entire, grammatically correct sentence just by repeating it 8 times. What I love about the French translation, however, is that it’s impossible to say without sounding profoundly apathetic. Try it. It’s like the concept of the buffalo is so inherently exhausting that you just give up halfway and resort to kind of grunt-sighing as a plan B. Also, if it’s a hot day, the amount of air that you just huffed out of your mouth will cool you and your conversation partner off without either of you having to find an awning or cheap novelty motorized fan. Granted, the number of occasions you will find to mention the noble buffalo in French is probably pretty slim, so it’s advised that you seek out bilingual ranchers if this is something you’re serious about.

10) Un ver (Worm): Ohoho. Ohhhhhhhhhh. I hate this word. I mean, I love this word since I put it on this list, but it’s a love that comes from a deep masochistic appreciation for its phonetic trickery. You may have realized this by now, but there are a LOT of words in French that look and sound VERy similar to our friend Mssr. Ver here. I shall illustrate with a sentence not unlike the Buffalo construction referenced above:

I know, you encounter that very common sentence almost every day. The green worms do love their scripture. But linguistic frustrations aside, I adore how miniscule and unpretentious this little noun is and I think it’s a phonetically suitable match for the unsung, unseen heroes of our planet. Vive le ver!

Unauthorized use and/or duplication of this material without express and written permission from this site’s author and/or owner is strictly prohibited. Excerpts and links may be used, provided that full and clear credit is given to the Alliance Française de Chicago and LearnFrenchChicago.comwith appropriate and specific direction to the original content.

Search for a class